Skip to content
It is often confusing to decide on which statistic to use at what point. Also researchers need to be careful that the statistics they present does truly apply in the context of the problem. Statictics can be misleading and probably incorrect if used outside the boundaries set by its assumptions. In this post we analyse different statistics and what care should be taken while using them.

Mean,Median and mode : The mean is probably the most widely used number. A lot of claims are made using the mean but this could be quite misleading. The mean does not include any measure of variability. Also, outliers may distort the mean to a large extent. Median can be reported with the mean to get an idea of how the extreme looks like. For a more detailed analysis the box and whisker plot gives a fair idea of how the data looks like. It is therefore better to provide a measure of variablility along with the measure of central tendency.

Discrete distribution : While using binomail distribution the independence and size assumptions should be met when sampling is done without replacement. In Poisson distribution the size and lambda assumptions should be met. for binomial distributions for large sizes of n the probability at a particular x value should be reported with care. for example in a coin toss with n = 100 and p=0.5 P(x=50)=0.076. This could be counter-intuitive and hence a better way to report this is to use P(x>50). In poisson study the value of lambda may change and hence the researcher should make sure that lambda is valid for their test conditions.

ANOVA: While reporting ANOVA results the researcher needs to consider all variables that may effect the outcome of the experiment. She should at least mention the concomitant variables that have not been considered in the experiment but that have been shown to show some influence to the dependent variable, however small that dependence may be. The treatment levels selected for the study should possibly be random. Certain tests such as two way factorial design or completely randomized design with Tukey’s HHSD may require equal smaple sizes. Sometimes researcher arbitrarily make up or delete values to make sample sizes equal and this is incorrect.

Multiple Regression: For a small degree of freedom the value of R squared obtained may be inflated. A cause and effect relationship may be assumed to occur between the dependent variable and the predictors. It is however possible that factors not considered in the study may be causing the behaviour. Also for multiple variables with different units the R squared values should not be compared. The coefficients of regression should also not be used to compare the effect of various predictors since the predictors may have different units. Also while building the multiple Regression model it is not necessary that the variables that enters the equation first is the most influential. 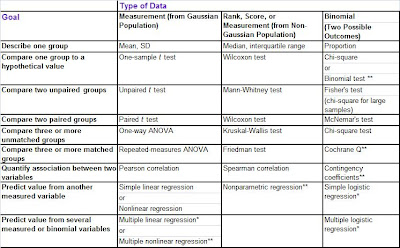